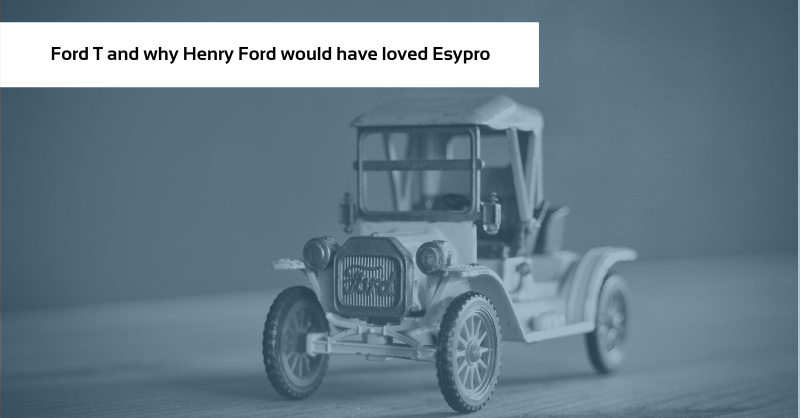 In 1908, the Ford Model T was manufactured for the first time. Although it was not the first car in history, it revolutionized the sector as it is known today. Henry Ford wanted to make a car for everyone and affordable not only for people with high purchasing power. In his desire to create a motorized vehicle for the masses, he managed to sell more than 15 million units of this model, thus revolutionizing the automobile world. How did he get it? The answer lies in optimizing his production process.

Before the arrival of the Ford T, the average cost of a car was around $4,000. Henry Ford managed to create his Ford T at a price of $825 in 1908. He even lowered that price to $260 in 1925. This cost reduction is mainly due to the implementation of assembly line work. Henry Ford discovered this concept at a meat company in Chicago, where they used a overhead conveyor to transport their products through the different stages of the process. Ford adapted this type of system within his plant and considerably reduced the cycle times of each process, introducing, for example, assembly lines and overhead conveyors.

“Any customer can have a car painted any color that he wants so long as it is black”, was the mythical phrase that Henry Ford pronounced at that time, referring to the standardization of elements and series manufacturing. Not all Ford T’s were black, but the vast majority were. There are theories that Ford chose the black color because the enamel in this color had a faster drying and thus managed to shorten its production time even more.

Fortunately, today multi-reference management in a plant no longer represents a problem and does not have to affect production times. Systems such as Esyconveyor, Almaflex and Esyair allow easy transport and storage, managing a multitude of references within the same work area with different types of part or hook detection.

“Save 10 steps a day for each of the 12,000 employees, and you will have saved 50 miles of wasted motion and misspent energy”, another mythical phrase of Henry Ford, with which we feel very identified. The optimization of production processes in which there is a flow of recurrent parts is also the main objective of Esypro. In addition, we offer the operator the maximum ergonomics to be able to carry out their tasks in their workstation. And the definitive evidence that Henry Ford would have loved Esypro is his following quote: “The best way is always the simplest.” Does this phrase sound familiar to you? We think it’s a match: Simple is better.

You can learn more about what cookies we use or disable them in the settings.

This website uses cookies so that we can provide you with the best possible user experience. The cookie information is stored in your browser and performs functions such as recognizing you when you return to our site or helping our team understand which sections of the site you find most interesting and useful.

This website uses Google Analytics to collect anonymous information such as the number of visitors to the site, or the most popular pages.

Please enable Strictly Necessary Cookies first so that we can save your preferences!